Straight to IVF after 8 Years of TTC 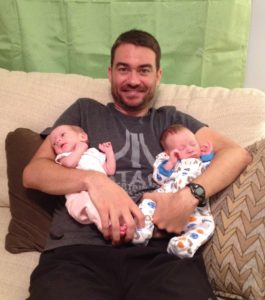 Kansas City, MO – June 10, 2014 – Last Father’s Day, Brian Bookwalter took the day off from work as a graphic designer at an ad agency and spent the day fishing with his dad. He and his wife of nearly five years, Kristin, had nearly given up on having a family of their own. A year later, after enlisting the help of Dr. Dan Gehlbach, founder of Midwest Reproductive Center, the couple will celebrate the occasion with twins.

“A year ago was very difficult for us,” Brian said. “Now, we’ve set up the nursery, had the baby showers, and gone from feeling unsure that we were ever going to have a family, to ‘it’s twins.’ That’s quite a change.”

Brian and Kristin graduated from Kansas State, but didn’t meet until an alumni gathering to watch a Kansas State/Iowa State basketball game. They met, married and decided to immediately “let nature take its course,” and forgo contraception.

“I never had an indication that I wouldn’t get pregnant right away,” recalls Kristin. “I had some cysts on my ovaries when I was younger, but my cycles were like clockwork.”

A Milestone Birthday, a Life-Changing Decision

Kristin went to her obgyn for a routine visit. She had already turned 30 and was still trying to conceive with the fertility medication Clomid. Her obgyn suggested that if Kristin wasn’t pregnant by her next birthday, it would be time to move on to a fertility specialist. “I realized that time is more valuable now than when I was younger.”

To that point, a new study funded by the U.S. National Institutes of Health, and published online April 29 in Fertility and Sterility; found that moving directly to IVF is the best choice for women over 38. Several of the couple’s friends had gotten pregnant with the help of Dr. Gehlbach, so they arranged a consultation in August 2013.

Meanwhile, Brian took proactive steps by seeing a urologist for male fertility testing, and enlisting an endocrinologist. Initial semen analysis reports indicated that Brian was on the low end of a normal sperm count (fewer than 15 million in an ejaculate), so it was possible for pregnancy to occur, but not likely. He began a course of a fertility medication to help increase the low sperm count, and the odds for conception.

One IVF Cycle Led to Success at Midwest Reproductive Center

Most fertility specialists will recommend more than one semen analysis. Sperm develop over a period of 74 days, so serial testing paints a more accurate picture. Midwest Reproductive Center tests revealed that Brian’s sperm count was within an acceptable range and sperm motility (movement) was good; however, morphology, the shape of the sperm, was below normal.

The Bookwalters soon learned that a combination of factors was limiting their fertility potential.

One third of infertility cases have male factors; female factors contribute to one third; and a combination of male and female causes accounts for the remaining third.

Brian says that Dr. Gehlbach was direct and honest with the prognosis, and he felt reassured by the fertility specialist’s years of experience and excellent bedside manner. Kristin added that they decided the day they met Dr. Gehlbach to jump straight to IVF, and that many of her friends who experienced infertility said they wished they had gone straight to IVF. Brian agreed: “Our patience had worn a little thin, and we decided to move strategically forward after all of those failed attempts.”

The Bookwalters decided to transfer two embryos five days after fertilization in the IVF cycle. Kristin explains their decision: “When you’re facing infertility, and it has been eight years, you ask yourself: Are we more concerned with getting pregnant, or having twins?”

Wondering ‘am I infertile’ was hard, recalls Brian, but it wasn’t nearly as difficult as what Kristin had to go through. “We feel pretty fortunate. We have a family of four … just like that.”

The Bookwalter babies were born in May. This year, Brian says he will spend Father’s Day changing diapers, perhaps taking his family of four to visit with his dad. His advice to men still struggling to overcome male infertility: Keep trying.

“Statistics are in your favor if you are getting IVF help or fertility help,” he says. “If you can get to that point [of seeing a fertility specialist], you increase your odds exponentially. It’s not easy. But it’s worth it.”